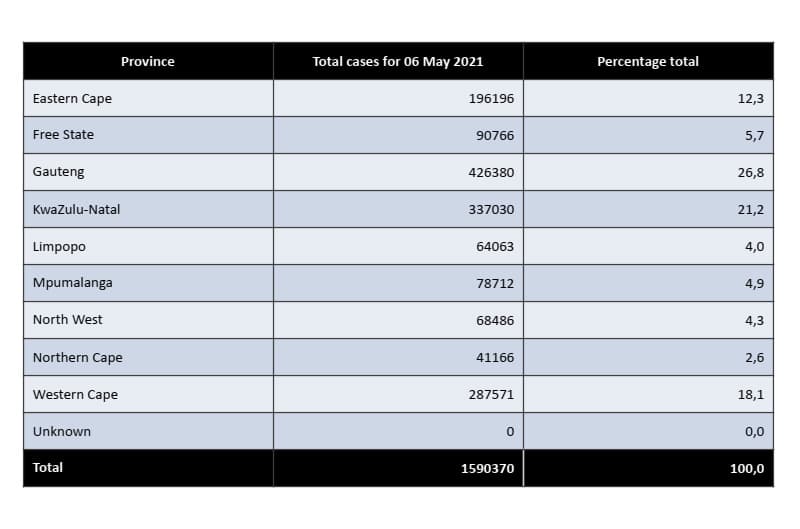 As of today the cumulative number of COVID-19 cases identified in South Africa is 1 590 370.

Testing Data
The number of tests conducted to date is 10 805 804. Of these 32 577 tests were conducted since the last report

We convey our condolences to the loved ones of the departed and thank the health care workers who treated the deceased patients. 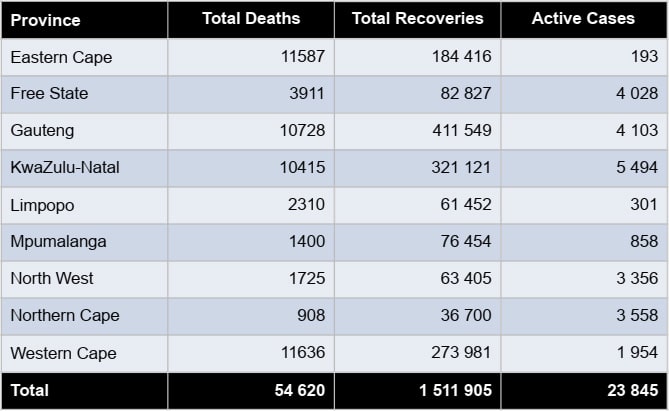 Vaccination Rollout
The number of Health Care Workers Vaccinated under the Sisonke Protocol to date is 366 101. 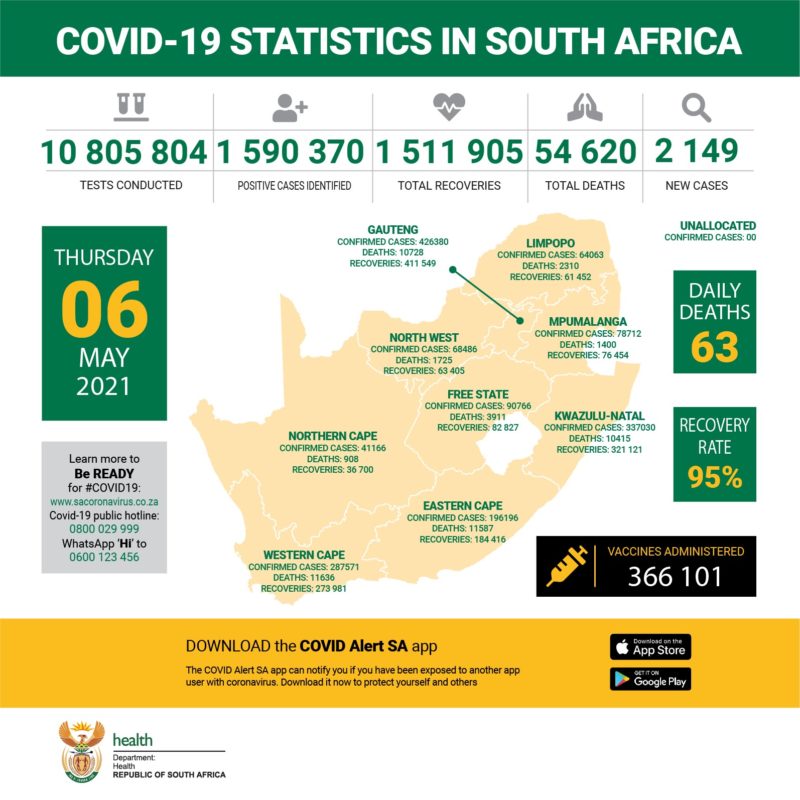 Rise in COVID-19 Infections and Prevention of a Third Wave
In the past two weeks, we have noticed a worrying trend of increasing numbers of detected cases in a number of districts. Free State, Gauteng, Northern Cape and North West are of particular concern but every province, with the notable exception of Eastern Cape, has at least one district of concern. The districts that have been flagged by NICD as “under observation,” due to an appreciable rise in the 14 day average percent change, are listed below. Although some of these districts may have relatively low case incidences, the significant rise in percentage changes should be taken as a serious warning.

All districts listed below have had an average rise of 20% or more in the past 14 days:

We must commend the Eastern Cape, where every district has recorded a zero percent average change. This does not mean they are not getting new infections but it does mean they have maintained a plateau, which is very encouraging. The Eastern cape suffered a devastating second wave and was the first province to adopt a differentiated approach where certain metros and  districts implemented tighter regulations than others, where it became necessary. The Eastern Cape has made great sacrifices to mitigate against the spread of COVID-19 and we must acknowledge this result and encourage the province to keep this up .

This reinforces the message that we can all play our part to ensure that these rise in infections do not turn into a third wave. We all know what it takes to keep the Coronavirus at bay- strict wearing of masks, sanitizing and avoiding crowded gatherings. The government can facilitate and intervene but ultimately we would rather concentrate on economic recovery rather than imposing more restrictions. Therefore every citizen must adhere to the non-pharmaceutical interventions if we are to avoid further restrictions.

This also goes for the way we approach the threat of variants of concern (VOC’s), like the B.1.617 variant circulating in India. Scientists around the world do not blame the devastating wave of COVID-19 on the variant alone but always observe that the lack of non-pharmaceutical interventions played a major role in the spread of the variant in that country.

Even though the B.1.351 (prevalent in our country) has more mutations than the B.1.617 (prevalent in India), we were still able to control the spread of B.1.351 in South Africa and bring the wave down to a plateau. Therefore we have no need to panic about the B.1.617 because, as with any variant of the Coronavirus, the treatment is the same and the way we prevent spread is the same.

Our scientists are working hard to examine the samples taken from patients that traveled from India.

One of the sequences of a traveller has been completed and it turned out to be the B.1.351 variantthe one that is circulating here in South Africa. This tells us that one cannot assume that a traveller
carries any particular variant and this is why we insist on being guided by the science.

Having said that, we do share the concerns of our citizens that we could import a variant of concern that can drive another wave. For this reason, the NCCC is deliberating on the issue of border control and final determinations will find expression in Cabinet and be communicated to the public accordingly.